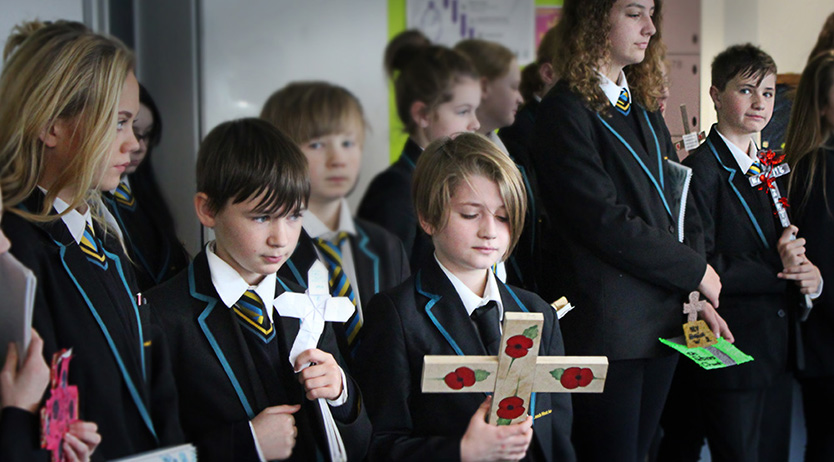 Students honour those affected by war

Every year Leeds West Academy observes a minute's silence for Remembrance Day, honouring those who have been affected by war. As part of promoting British Values, our students understand that individual liberties exist through tolerance, democracy and the fortune of living in times of peace and freedom.

This term, Year 8 have been investigating the specific contribution of the people of Bramley in World War I, as part of a Humanities project entitled 'Who do we Commemorate and Why?' Year 8, along with all students and staff at Leeds West Academy, displayed their works of remembrance during the minute's silence for remembrance on Friday 11th November.

On Sunday 13th November, students and staff from the Academy also attended the Armistice Day Service at Bramley War Memorial. Many members of the community were in attendance, including Scouts, Beavers, Cadets and the local choir who performed during the ceremony. There were also a series of readings from Sikh, Muslim and Jewish communities, reflecting on the many lives that were lost through war. Cllr. Caroline Gruen was at the ceremony and spoke of how impressed she was to see such a large number of young people attend from local schools.

Principal Nick Hinchliffe was in attendance and added: "It is very important that our school community honours those who have been affected by war. In Britain we are  fortunate to live in times of individual liberty and tolerance; today we reflect, respect and thank the people who sacrificed their own lives to protect and secure freedom for us all."